pre-publication summary of Part 3 of The Cloud Computing Guide for Non-Techies by K. C. Flynn

IF THE INTERNET ISN’T BROKEN,

Internet traffic flows along a global web of “pipes” that is astoundingly heterogeneous and labyrinthine. More than a trillion dollars has been invested in the infrastructure and it continues to grow at a rapid pace. In the U.S., demand for greater and greater capacity has lead to immense capital investment by a relatively small number of ICT corporations. Even though conventional wisdom says that no one owns the Internet, ICT corporations own the cables, routers, towers, satellites, and computing equipment that carry Internet traffic for all of us.

And if there’s one thing as complex as the infrastructure, it’s the Internet marketplace. Pipe owners, online content providers, businesses, and consumers have a stake in how the market functions. At this pivotal moment in Internet expansion, each of the different stakeholders attempts to establish practices and statutes that support its own well-being.

The interests of the various stakeholders aren’t in easy alignment. Their rivalry underlies the recent, much-publicized debates over “fast lanes” and net neutrality guidelines. Establishment of the Open Internet Order by the FCC in 2015 is one event in an ongoing, fiercely contested standoff.

Non-techies joined the open Internet debate en masse, but didn’t always have reliable information about the machine or its masters. This short ebook contains basic info about today’s Internet infrastructure and marketplace, revealing that we stand at a formative juncture for both. Perhaps we also stand at a formative juncture for public engagement with the world of high tech. Because we really don’t want to break the Internet.

Click here for an overview of The Cloud Computing Guide for Non-Techies. 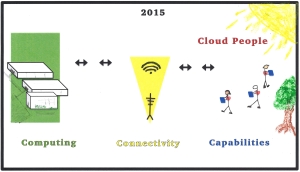 to The Cloud Computing Guide